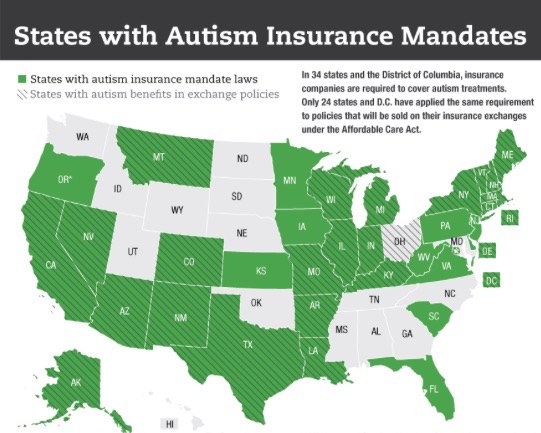 In some states, parents often pay for autism treatment out of their own pockets. However, many state legislatures are currently having heated debates about whether insurance premiums should cover treatments for individuals with autism.

Much of the debate centers around paying for the extra coverage through the increase in insurance premiums for individuals, small businesses and insurance providers. However, the expansion of insurance coverage for autism type conditions and treatments is increasing across the nation. For example, starting in 2017, United Healthcare will include applied behavior analysis (ABA) coverage as part of its standard benefits package.

United Healthcare (UHC) announced that all fully-funded group plans, regardless of whether that plan was issued in a state that has passed an autism insurance mandate, will include coverage for autism treatments. United Healthcare stated in a news release. “Beginning on or after Jan. 1, 2017, United Healthcare will be extending ABA benefit coverage to new and renewing fully insured small and large group plans in the few remaining states that do not mandate ABA coverage.”

United Healthcare announced it was making this change because the company recognizes “the growing interest in ABA among many consumers and in the marketplace.” UHC cited the number of states that mandate ABA coverage of the treatment of autism as a factor in its decision.

UHC also noted that a “growing number” of self-funded plans are providing coverage for ABA “based on member demand and other market forces.” Under this new insurance coverage expansion for conditions such as autism, self-funded plans will include coverage, if the plan does not expressly exclude autism coverage. This new coverage went into effect January 1, 2017.

Questions about medical billing or insurance credentialing?  CONTACT US