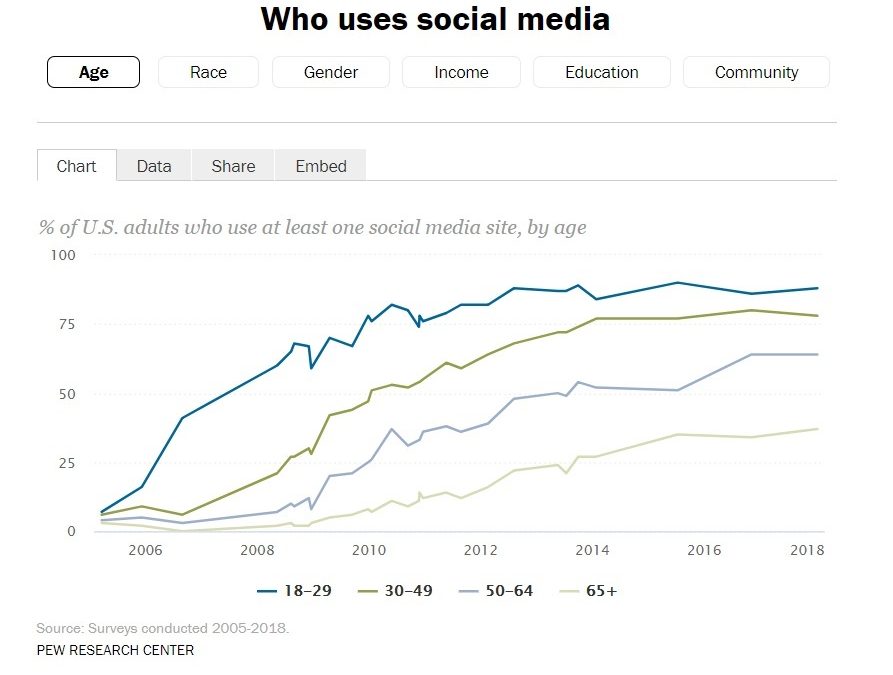 Social media networks are an important method of mass digital communication. Celebrities, politicians and companies have learned how to maximize communication opportunities through these new channels. Social media provides a direct way to message patients as well as have them engage with their healthcare providers.

Medical practitioners have seen this trend developing and are starting to use social media networks as another way to engage with both current and potential patients. The growing importance of social media in the doctor-patient relationship displays the communication challenges facing physicians and other healthcare providers as they meet the needs and expectations of their patients.

To put these new forms of online communication in perspective, people who directly use social media to communicate with their healthcare provider is only a small percentage of the total number of Americans who use social media. A 2018 Pew Research Center survey of U.S. adults finds that the use of social media networks is defined by a mix of long-standing as well as newly emerging trends.

According to the survey, 88 percent of U.S. adults (ages 18 to 29) use some form of social media network. The amount of usage drops as the age of adults increases, falling to 78 percent among adults who are 30 to 49 years old. This trend continues with age, with 64 percent of adults between the ages of 50 to 64 and 37 percent among those 65 years and older using social media platforms.

Facebook and YouTube (Google/Alphabet) are still the most popular social media platforms, with a majority of U.S. adults routinely using each of these sites. Simultaneously, younger Americans stand out for embracing a variety of platforms and using them frequently. Some 78% of 18- to 24-year-olds use Snapchat, and a sizeable majority of these users (71%) visit the platform multiple times per day. Similarly, 71% of Americans in this age group now use Instagram and close to half (45%) are Twitter users. In many instances, people are accessing social media throughout the day.

Seventy-four percent of Facebook users, 63 percent of Snapchat users and 60 percent of Instagram users visit those sites one or more times per day. These groups are not exclusive, with many people using multiple social media platforms which creates a sizable overlap between the users of different online services. For example, the survey results showed that 87 percent of people who use Facebook also use YouTube, and 90 percent of people with a LinkedIn account also use Facebook. As with overall use, the average number of social media platforms used was highest among adults 18 to 29 (four), decreasing to three platforms among adults 30 to 49, two among those 50 to 64, and one among those 65 and older.

The increasing use of social media and other online channels is not only occurring among patients. According to the Southern Medical Association, roughly 88 percent of physicians and other healthcare providers use social media as well as the internet to research medical devices, pharmaceutical information, and biotech data. Much like professionals in other fields, doctors are using social media networks as a tool to reach out to other specialists.

For example, they can explore the social media pages of pharmaceutical companies and device manufacturers. Healthcare professionals may even follow the blogs and news update of other practitioners to learn more about their experiences. More professional online networking and social media channels like ZocDoc or LinkedIn provide access to online communities and enable users to create CV-like profiles that showcase qualifications, skills and achievements. These specific social media channels allow users to search for members with expertise in many occupational fields, as well as create networks and groups that encourage discussion and collaboration among fellow professionals.

Facebook has the largest user base of any social media platform, with roughly 2 billion active monthly users worldwide. The popular social media network was launched on February 4, 2004. Since this time, it has grown in size and dominance. Facebook is centered predominantly on text-based interactions, with the ability to embed photos, links, and videos. This social media network also has a dedicated platform for many industries and fields that use custom analytical tools that make it easier to create paid advertisements.

Facebook has the largest user base of any social media platform, so it is used by a diverse group of people. Typically, for medical practices and healthcare providers, Facebook’s content is directed toward patient advocacy and patient engagement.

Twitter is centered on text-based interactions between users called tweets. As of April 2017, Twitter had 328 million active monthly users, with more than 1 billion unique visits to websites embedded within tweets (messages). Originally, tweets were composed of no more than 140 characters, but on November 7, 2017, the limit was doubled to 280 characters. Tweeting on this platform provides a brief but direct communication to all followers of a user.

Other users can stumble upon tweets when they search for specific hashtags. With its large user base and text-centered format, discussions on Twitter can include comments and responses to individual tweets on a specific topic. Apart from text-based capabilities, users are also able to embed media such as links, pictures, and videos within tweets. The use of media has become more prevalent, and many users now add images or videos to supplement text-based tweets.

The various social media platforms have inherent advantages and disadvantages. However, the ways in which patients and healthcare providers interact has forever changed. Communication channels that patients now use include phone, e-mail, a social media platform and/or a healthcare-specific web portal. Patients who are under 30 are more comfortable using text or e-mail to contact their healthcare providers.

For additional questions or comments please contact us. We will explore this topic in future articles as social media technology increasingly becomes embedded in people’s everyday activities. Advanced Billing & Consulting Services is a full-service medical billing company. Our services range from credentialing and digital marketing to HCBS Waiver billing and workforce management tools.